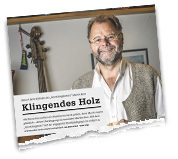 Visit to the inventor of the "KernKlangbrett" Martin Kern

For Martin Kern, music is man's most important form of expression because it demands all five senses, he says. Good, I think. Hear? Sure, that's the essence of music itself. See? Okay, when reading music and interacting with others. And yes, of course, the sense of touch that is required when playing an instrument. But smell and taste? Immediately Martin Kern holds out to me one of his soundboards and the smell of wood and oil rises in my nose. "And tasting? Anyone who has ever sharpened wood knows how to taste the wood. "Enthusiasm for the music and all that has to do with it is, so to speak, already something for the 60-year-old music teacher Martin Kern from Buchenberg in the Allgäu been born in the cradle. Coming from a musical home, he learned as a child numerous musical instruments and others in self-study, so that today he can play well over ten different instruments. Since 1980 he teaches as an independent music teacher young and old on guitar, dulcimer, clarinet and zither.
Dedicated musician and educator
In addition to private lessons, Martin Kern also offers instrumental lessons in various children's homes in the Allgäu, where children and adolescents from difficult social backgrounds, but also unaccompanied minor refugees are cared for. During this work, Martin Kern repeatedly found that his young music students had difficulties exactly to hit the harpsichord strings repeatedly strung with the appropriate flails per tone. From this observation, he developed the "core soundboard" a good twelve years ago, a trapezoidal plucked instrument with 22 individual strings played on the table. With the corresponding game templates, which, laid under the strings, in a simple way show which notes are plucked in which order and duration on the appropriate string, you can - without any knowledge of notes! - make music.
From local production
The first prototypes of the "core soundboard" were made by Martin Kern in collaboration with a fellow instrument maker. The instruments, which have been developed for series production, are today produced in a carpentry shop in the neighboring village of Buchenberg. Joiner Helmut Mayr, who runs a workshop in Eschach with 13 employees - specializing in window, door and conservatory construction - was enthusiastic about the construction of the instruments and produced the components of the soundboards. The frames made of seasoned beech wood, ceiling and floor made of thin beech plywood - for higher quality instruments also made of solid spruce. David Kern, the son of Martin Kern, responsible for the assembly and the finishing touches, has also taken over the marketing and distribution of the instruments. Finally, the instruments in the carpentry Mayer with water-based paint are environmentally friendly. Finally, Martin Kern lends a hand, picking up strings and making the instruments ready to play with the knowledge of the experienced musician.
Join craft and hobby
Martin Kern is convinced that a self-built instrument motivates even more to play and therefore offers soundboard construction courses four times a year. In these courses, the participants prepare a playable soundboard on Saturday under expert guidance in the joinery Mayr. For those interested, Martin Kern offers a compact introduction to the game of the instrument the following Sunday. The core soundboard is available in a variety of versions: the standard version or a deluxe model with a larger resonant space and more sound volume, and can even be electrically amplified with an optional built-in pickup. Likewise, in recent years, an extensive range of accessories has been added, especially numerous thematically summarized sets of game templates, from simple children's songs to well-known film tunes.
A life for the music
But Martin Kern's musical activities are not exhausted in soundboard construction and playing. He is an active folk musician, folk music researcher and composer well known beyond the borders of the Allgäu. He is responsible for the Bavarian Broadcasting and thus passes on his own enthusiasm. In line with his credo: everyone should play a musical instrument, because music makes you happy!