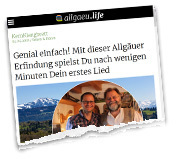 »Ingeniously simple! With this invention from the Allgäu region you play after a few minutes your first song.«

You think you are unmusical and can not read music? Welcome to the club. That's the way it is for most of us. Nevertheless, even the biggest music fanatic would like to play an instrument. Our tip: Try the KernSoundboard. Why this is easy to play, you will find in the article.

Sophie (11), Joyce (10) and Cyriacus (12) are ahead of us: they are really musical and play several instruments. For beginners, they recommend the soundboard invented by their music teacher Martin Kern. "You learn to play a piece very quickly, it only takes a few minutes, even if you have never made music before," the three students agree.

In fact, for the music educator Martin Kern (60), ease of use came first when he designed a prototype 14 years ago. Objective: an alpine instrument that everyone can play immediately.
He had the idea for this during his work in various children's homes. He observed that children found it difficult to hit the right strings on the dulcimer with the two bobbins. Some gave up unnerved. But that was exactly what hurt the thoroughbred musician Martin Kern. "Music should make people happy," he says with a smile. So he became an instrument builder.
The KernKlangbrett reminds by its shape and the stringing of a dulcimer. But the 22 strings are plucked with your fingers and not struck with a felt mallet. "Playing with your fingers is much easier," says Martin Kern. Another special feature: Under the clothing can be pushed a large sheet that displays each note just below the associated string. The player only has to pluck the proposed string from left to right. Dead easy. After a few minutes, the first song will sound.
Martin Kern wrote more than 260 melodies on large bows for the soundboard. They range from children's songs to folk music, from classical to pop and rock (for example Cat Stevens, Elvis or Uriah Heep). Each time only a few bars fit on a game template. "The notes of Beethoven's Ninth Symphony," says Martin Kern with a smile, "unfortunately do not sink on our sheet music."
The beginner should not care. Because he is pleased with the rapid progress and can soon boast of playing one or the other well-known melody. And that is possible more and more people between the ages of four to 99 years, as Martin Kern tells.
He builds and sells the KernSoundboards together with his son David. "Customers order far beyond the Allgäu," says the 32-year-old. There are now five models from 379 euros. Although even music shops have shown interest. But the Kerns prefer to rely on self-sales: "We want to continue to offer quality instruments at a fair price and have a direct contact with the customer." You can also build your own instrument in your own courses.

By Tobias Schuhwerk and Stephan Michalik

[ See the report, pictures and video ]