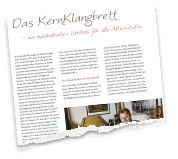 The KernSoundboard - a musical experience for all ages

The healing effect of music is well known. However, those who do not just want to be sprinkled with the sounds of a CD, but want to lay hands on an instrument themselves, had to complete a few hours of music lessons in order to be able to recite the chosen pieces reasonably passably. Such long and tedious practice is no longer necessary on the core soundboard with the corresponding templates. The robust instrument developed by the Buchenberger Martin Kern is similar in shape to a dulcimer and is covered with 22 strings. The chromatic range ranges from c1 to a2 and can be easily tuned using an electronic tuner. The KernKlangbrett is not played like the dulcimer with two mallets but only by plucking the strings with your fingers. Since Martin Kern's specially designed game templates are shoved into the instrument, it makes it easy for the player to follow the lead from left to right to create a melody. This simple principle makes the KernKlangbrett the ideal entry-level instrument. Whether children aged two or three or seniors at 99, Martin Kern assures that everyone enjoys their instrument, because "the secret is that anyone can play it without being able to read music or any other music Would have to meet requirements. »This emotional success experience is particularly inspiring for children, not only mobilizing their hearing, but also increasing tactile sensibility and promoting the eyes of hand motor skills.«

From children's songs to classical music
Martin Kern had a special connection to music from an early age, as he was not only confronted with music at home, but also had the opportunity to learn several instruments. Through music lessons, but also partly self-taught, the instrumental repertoire of the Buchenbergers grew ever larger over the years. So today he can proudly claim to be able to perform on about ten instruments. After completing his social pedagogy study, he started his own business as a music educator. "The jump into the cold water was just the right step," says Martin Kern today, because only then could he "develop freely in every direction" and had the opportunity to put his heart's desire into action. Already during his studies he dreamed of "using music as a medium to reach out to people and ultimately to give them something". By requesting a children's home, Martin Kern had the opportunity to combine education with music. There he got the mental impulse to develop his core soundboard. Although the kids took the offer to play the dulcimer enthusiastically, nevertheless Martin Kern had to realize that the meeting of the strings with the Schlegeln presented children with motor deficits again and again problems. Without further ado, the Buchenberger decided to develop an instrument that can be played without flails. Over the course of a few years, the core soundboard was created by much experimentation with this idea. On the special, tailor-made game templates, the educator still leaves his little students enough space for creative decorations of the background. The KernKlangbrett can be purchased on the internet at www.kernklangbrett.de but not only as a ready-made instrument in the standard or deluxe version, but it is also available as a semi-finished instrument »so that the grandfather can build it together with his grandchildren«. In addition, one-day construction courses are offered, where students can build their own core soundboard under expert guidance. As part of Martin Kern's many years of experience, the core soundboard has proven itself not only in kindergarten, in early music education, in school and in the music therapy field, but also as a popular instrument for adults and seniors. Martin Kern counts a number of senior citizens among its customers, who fulfill their lifelong dreams by playing the core soundboard. The meanwhile 240 songs, which are available as special templates, range from children's songs to alpine folk music and classical pieces to folk and rock melodies. No matter if children want to play »all my ducklings«, an adult wants to try himself as Reinhard Mey or a classical music lover dares to play one of the polyphonic Allegretto, musically there is something for every taste. With the practice and play-along CD, you even get polyphonic joy. The core soundboard can be perfectly integrated into the game with other instruments.