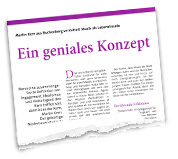 »Martin Kern from Buchenberg conveys music as a zest for life«

If a consolidated definition of engagement, idealism and versatility is to be at the core, then it's "the core" (german "Kern"), Martin Kern.
Born in Lower Bavaria, he studied social pedagogy in conjunction with music. He decided in 1980 to work as a self-employed music teacher. Martin Kern, father of four now grown sons, has been living in Buchenberg for over three decades with his wife. As a self-taught music teacher, he teaches lessons for clarinet and various string instruments, such as guitar, dulcimer and zither.
This was certainly a fortunate circumstance for many people, but especially for two girls from Buchenberg and Kempten, Katja lives in a residential group and is cared for by the Lebenshilfe. Agnes lives at home. Both work in the Allgäu workshops in Kempten and are now 27 and 25 years old. They play music with Martin Kern from their youth, have fun and are still looking forward to the weekly lessons in Buchenberg. Katja has meanwhile switched to the dulcimer, Agnes remained true to the KernKlangbrett (CoreSoundboard).

Loose interaction
Martin Kern invites me to attend one of these lessons. I'm already there when the two young women arrive for their music lesson. They are tired and loaded with all the frustration of everyday work, but are nevertheless concentrated in the matter. With his relaxed and uncomplicated manner, Martin Kern immediately conjures a smile on the face of the girls and accompanies them patiently with his guitar. After only a few minutes you lose the tension of the day and I'm fascinated by the interaction of the three instruments and above all the three different characters. Happy and satisfied, they go back home and are already looking forward to the next week. The spark that music can move the world and connect people has jumped on me here and now. I am grateful to Martin Kern and the two young women for this unforgettable evening, because all three have left a lasting impression on me.

Touching experiences
Afterwards I have the opportunity for a personal talk with Martin Kern and get to know more about his work and his ideas. I ask him about people or events that have stuck in his mind. And how he sits opposite me and tells a few anecdotes with shining eyes, an inner satisfaction is felt. This man rests in himself and at the time made the right decision with his step into self-employment.
One day an elderly lady called him and thanked him wholeheartedly with the words: "Do you know that you made me happy with your KernSoundboard?" He asked how he could have made her happy, he Do not know her at all. Then the woman told him that the music accompanied her all her life and was her great passion, but one day she had lost an arm in an accident and thus inevitably her life. She became aware of the KernSoundboard and was able to make music again with only one arm thanks to this ingenious invention. As a result, she said, she had regained her quality of life and confidence, and she felt human again. He feels, he tells me authentically, as a happy, satisfied and fulfilled person and when his students go home after a music lesson happy, laughing and completely free of stress, he has reached his goal.

The KernSoundboard
The idea for the soundboard came to Martin Kern about 10 years ago during his work in the various children's homes. In the classroom, he kept watching over the dulcimer's difficulties in correctly assessing the distances of the strings with the mallets and to hit the correct notes. so he constructed a board on which the strings have a distance of 15 mm to each other, thereby comfortable and safe to grip. The concept of music templates has existed for about 100 years - these were developed at that time for the Akkordzither but such an idea must first be implemented accordingly. Along with these templates, the KernSoundboard is an ingenious tool for all people, big or small, young or old, skilled or impaired in fine motor skills; an ideal instrument, ideally suited for use in the therapeutic field, as well as in kindergartens or nursing homes and in early musical education.

Self-experiment
Even as a completely unmusical person, who can not read music, I am very excited about this invention. During the lesson, Martin Kern simply put a soundboard in front of me, put a music token, a so-called plectrum, in my hand and asked me to play along - and it was incredibly fun. While he tells me a lot about it and shows me preliminary drafts for polyphonic pieces of music, I get an idea what else is possible here. Up to now, Martin Kern offers a construction course for his KernSoundboard about twice a year. With appropriate demand, he certainly will find an additional appointment. More about this on his homepage www.kernklangbrett.de.
In addition to his work as a freelance music teacher and music educator in children's homes Martin Kern u.a. also for the Bayerischer Rundfunk, is a composer, instrument maker, holds seminars and concerts. He was particularly impressed by the alpine wind music. Inspired by researching in a variety of notations, some of which go back to the earliest 19th century, he has written numerous music books and recorded CDs. He was also a guitarist with the shear zither player Max Schraudolph. Even during his lifetime (Schraudolph died in 1999) he left his musical friend his two old zithers, so they do not disappear completely from the scene. Martin Kern pays homage to this gift and the zither player himself by writing and publishing a music booklet about Max Schraudolph and his works.

Peoples Connecting Music
Its musical sphere does not only take place in Germany, but extends over many European, more Nordic countries such as Scotland, Ireland or Scandinavia. Among other things, he wrote a suite entitled "Memories of Scotland" (to be purchased as a music book and CD) in 2006, or created a musical score for Southern England with the sonorous name "Lovely Songs Of Cornwall." He even offers instrument making courses on the island of Elba on.
Toward the end, he shows me how such a piece of music can emerge. For this he starts by taking a few notes and revising them on the computer. He lets me listen to the composition, which he has not yet completed, for his ensemble "Allgäu Bauernmusik", which consists of two Flugelhorns, two clarinets, a baritone, two trombones and a tuba - it sounds so lively, happy and elated. The group has fixed dates for appearances in the Hofbräuhaus in Munich and at various music events, and Martin Kern and his sons were invited to Dornbirn for the 40th anniversary of ORF Vorarlberg.

Idealist through and through
After this flood of information about his work and his intentions, I have the feeling, no matter how much I report here about him, that I have somehow forgotten half. All my esteem and praise to this patient and sympathetic idealist, who does so much here not only in the musical field. During our conversation I kept asking myself secretly, shaking my head, how many hours such a day in the life of Martin Kern may have or have to have, only 24 can be impossible enough ...