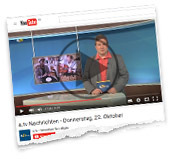 Martin Kern tries it in Steinegaden with a music education concept.

It all seems so peaceful - Martin Kern, the music teacher plays the guitar, the two boys from Syria pluck a melody on the KernSoundboard. Every Wednesday, Kern comes to the "Villa Rosa" for 2 hours and works with the "unaccompanied minor refugees". Mostly they make music together, because music does not know any language. "You can do a lot with music and that's the important thing, because the young men who are sometimes highly traumatized and have experienced things that they would rather not tell in detail and with music much dissolves. About the music, about the fun, about laughing then come serious things like an example of a boy who said he was so sad today, he could play today only a sad song and then I wrote a sad song on a template for the soundboard and he played it quite often until he was getting happier and more relaxed and in the end he was very happy when he left after class, "says Martin Kern.
In this round, the music teacher is allowed to bring much luck and relaxation until these stories are worked up - if that's even possible, because each refugee brings his own story and his own destiny.